Manx cats can be found all over the world, they were one of the first international show cats. In fact, there are now far more Manx cats in North America than on the island where they originated. But they all owe their origins to the Isle of Man, a small island set in the Irish sea between Britain an Ireland. 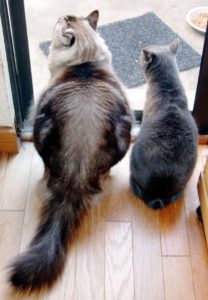 1. Origin by folklore – there are numerous fanciful accounts of how Manxies came to lose their tails.

They are the result of a cross between a cat and a rabbit.

Another imaginative story tells how Irish invaders stole the cat’s tails to make plumes for their helmets.

Other say that the Manx was running late for Noah’s Ark, and Noah slammed the door and severed its tail.

2. The reality – their tailless state is the result of a genetic mutation.

Four possible mutations of a single gene can lead to a Manx cat. In 2013, one gene was shown to have four possible mutations that can lead to a tailless Manx cat. All four mutations are specific to the Manx – other tailless or bob-tailed cats carry different mutations responsible for the trait. The study’s co-author Leslie Lyons, a cat expert and geneticist at the University of Missouri – Columbia, went to the Isle of Man herself to collect samples from Manx cats. The mutations were present there, meaning all Manx cats must have come from tailless cats on the island, which have lived there for hundreds of years.

Isle of Man resident Sara Goodwins, author of the book A De-tailed Account of Manx Cats, notes that the first linguistic reference to tailless cats on the Isle of Man appears in the mid-18th Century. Before that, since there was no special word for them, Goodwins says that it was unlikely they were present in any significant number.

The gene that carries these mutations is dominant, making it easy enough to pass on,. There is an interesting quirk: if an unborn cat inherits the gene from both parents rather than just one, it will likely die in the womb. That is why the gene has been nicknamed, “the lethal gene”. Even when the gene is inherited from just one parent, it is not necessarily benign. Manx cats can suffer from health issues related to having too few vertebrae in the lower or lower-middle part of their spines.

3. Manx owners say the cats have lost feline characteristics aside from their tails

— a Manx will even go for a walk with you!

– most cats hate water but Manx cats like swimming.

It is not known why they behave like this.

4. Manxies can give birth to kittens with or without tails.

Manx cats carry one gene for a full tail, and one for taillessness. This means that two Manx cats can mate and produce a kitten that’s a typical long-tailed feline.

The Manx gene is an incomplete dominant gene, so kittens that inherit it can be born with full- length tails, stubby tails, or no tails at all—and all of these tail lengths can appear in a single litter.

Due to this variability, Manx cats are classified according to tail lengths. Completely tailless felines are called “rumpy,” whereas cats with short tail stumps that are often curved, knotted, or kinked are known as “stumpy,” and kitties with nearly normal-length tails are called “longy.” Only “rumpies,” or cats called “rumpy risers” that have a slight rise of bone where their tails would start, are eligible to compete in the championship classes in CFA cat shows.

Koko, the famous research gorilla that knows more than 1000 words of modified American Sign Language, once owned a Manx cat. In 1984, Koko was allowed to choose a pet kitten from a litter for her 12th birthday present. Koko selected a tailless grey-and-white cat, which she named “All Ball.”

Koko loved All Ball, and cuddled and played with her on a regular basis. Sadly, All Ball was struck by a car later that year and died. A devastated Koko was given a new pet, a red kitty named Lips Lipstick. She later owned a third cat, a gray feline named Smoky; the two animals were companions for nearly 20 years until Smoky died of natural causes.

8. The Manx cat can balance without a tail.

Since a cat’s tail is instrumental for balance, how do Manx cats manage to walk without wobbling? Experts think they have an especially sensitive vestibular apparatus inside their ears to compensate.

As cats use their tails for balance when running and jumping, and to communicate body language, it seems odd that some should lack them. There seems to be no natural advantage to being without a tail. Instead, the gene likely has been passed on mainly through selective breeding by humans, a process called “novelty selection”.

The breed has, against all the odds, survived and thrived, even far from its original shores.

The Manx has – if nothing else – certainly travelled well. So, the next time you come across a Manxie, you’ll appreciate better its humble nature.

This post is taken from ‘The World Around My Books‘ section of the site.