At the start of The Ice Remembers, Vasily and Nikita embark on a Kalinin K5 aeroplane for their journey to Kolguyev island.

The K5 was a rather unremarkable aircraft but hang in here and learn more about the bizarre beast which came after it!
The Kalinin K-5 was an airliner designed by Konstantin Kalinin and produced in the Soviet Union in the 1930s, more were built than any other Soviet airliner of its time, about 260 aircraft constructed. It was a high-wing, strut-braced monoplane with an enclosed cabin and cockpit. 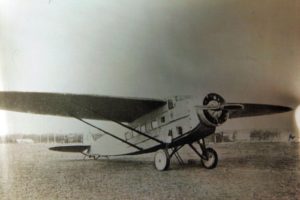 Nothing spectacular and probably not of much interest except to an aircraft enthusiast. But look at this – 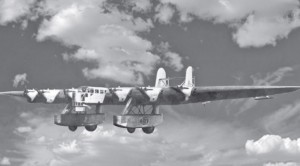 The wings were so thick, 2.3, metres that they contained seats in the passenger version 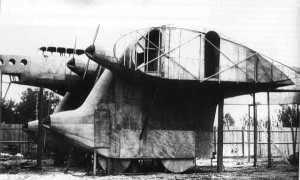 It was an experimental heavy aircraft designed and built in the Soviet Union in the early 1930s, with the unusual design of twin tail booms and large under-wing pods containing the landing gear and machine gun turrets.
As an indication of its weight, over 24 tonnes empty, the air frame was constructed from chrome-molybdenum steel! The original design had six engines on the leading edge of the wings but the loaded weight so exceeded that projected, two more were added to the trailing edges of the wings.
With a wingspan close to that of a B-52 and a much greater wing area, the K-7 was one of the biggest aircraft built before the jet age.
In civil transport configuration, it would have had a capacity for 120 passengers and 7,000 kg (15,000 lb) of mail. As a troop transport it would have had capacity for 112 fully equipped paratroopers. In bomber configuration it would have been armed with 8 x 20mm auto cannons, 8 x 7.62mm machine guns and up to 9,600 kg (21,200 lb) of bombs.

Designed by World War I and civil war pilot Konstantin Kalinin at the aviation design bureau he headed in Kharkov, with a wingspan close to that of a B-52 and a much greater wing area, the K-7 was one of the biggest aircraft built before the jet age. It had an unusual arrangement of six tractor engines on the wing leading edge and a single engine in pusher configuration at the rear.

The K-7 first flew on 11 August 1933. The brief first flight showed instability and serious vibration caused by the air frame resonating with the engine frequency. The solution to this was to shorten and strengthen the tail booms, little was known then about the natural frequencies of structures and their response to vibration. The aircraft completed seven test flights before a crash due to structural failure of one of the tail booms on 21 November 1933. 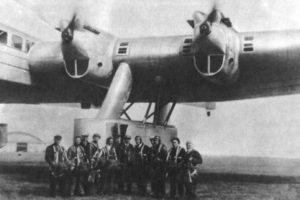